The Ballad of Blake Bravo

SPOILER ALERT: Contains spoilers for The Marriage Agreement, The Bravo Billionaire and The Marriage Conspiracy.

Note to readers: The notorious and now deceased Blake is the father of several Bravo heroes and heroines. Check out the list at the bottom of the page for the titles of the stories of Blake’s children. 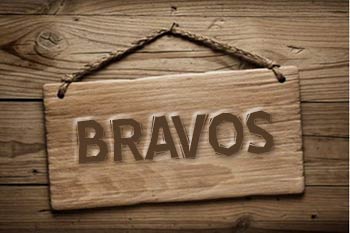 Harry and Blake Bravo were the sons of privilege, born to Jonas Bravo, a multimillionaire who made his money in a number of big land deals in Southern California in the 1930’s and 40’s.  Harry, the oldest, was a good boy, the favored son.  And Blake was the troublemaker, a boy born to end up on the wrong side of the law.

By the time Blake was twenty, his father had had enough.

Jonas disinherited Blake.  For a number of years, Harry gave Blake money whenever his n’er do well brother showed up with his hand out.   But then Blake ran into their father one day when Blake came to try to talk his softhearted older brother into another “loan.”  Jonas ordered him out.  Blake physically attacked his father, beating him badly.  Harry came to Jonas’s aid and won the fight, trouncing Blake soundly.

Blake’s attack on their father was the final straw for Harry.  He told Blake he never wanted to see his face again—and he never did.  Neither did their father, Jonas, who died a couple of years later.

A year after Jonas Bravo died, Blake murdered a man with his bare hands in a barroom brawl.  To evade capture and trial and a lengthy imprisonment, Blake faked his own death in an apartment fire. To this day, it is not known whose body was found in the smoldering ruins of the fire—or how Blake managed to falsify dental records so that the body’s records matched his own.

But Blake was not finished with the family that had scorned him.  Five years after Harry threw Blake out of the Bravo mansion for the last time, Blake heard of the birth of Harry’s second son, Russell (later called Dekker Smith and hero of The Marriage Conspiracy).  Blake hatched a plot to kidnap the baby and hold him for ransom.  He talked a gullible girlfriend, Lorraine, into falling in with his scheme.  They broke into the nursery late at night to snatch the child—running into a problem when the baby’s older brother, Jonas (named after his grandfather and 6 at the time; hero of The Bravo Billionaire), woke in the room next door and caught Blake and Lorraine in the act.  Blake grabbed the 6-year-old and clamped a gloved hand over his mouth.  Jonas fought valiantly to get away, while Blake told Lorraine they’d just have to take both children.

Lorraine freaked.  She started arguing.  She never should have agreed to do this. A baby was one thing, but how was she going to keep a 6-year-old quiet while they waited for the ransom demands to be met?  As the two kidnappers argued, Jonas kept struggling.  Finally, Blake knocked the child unconscious and he and Lorraine took off with the baby.  Jonas suffered a concussion, was comatose for several hours—and ended up with amnesia when it came to the events of the night his brother was taken.

Blake dropped Lorraine and the baby off at a secret location and went about negotiating for the two million dollar ransom, which he demanded be paid in diamonds as they are compact and easy to carry.  Harry and his wife Blythe paid, as instructed, getting the diamonds from a diamond dealer.   Still completely unaware that his own brother had taken his baby son, Jonas had the police in on the whole transaction in hopes of catching the kidnapper if he made a single slip-up.

Blake didn’t slip up.  He got away clean.  And once he had the diamonds, Blake decided it would be unwise to return the baby; it would only be another opportunity to get caught.  In the meantime, Lorraine, who was unable to have children herself, had developed a powerful attachment to the kidnapped child, Russell.

For a year, Blake, Lorraine and baby Russell lived under a series of aliases,keeping a very low profile, never staying in one place too long.   During that year, Harry died of a heart attack, leaving his wife Blythe to suffer a mental breakdown and his older son, Jonas, without a father or a brother—or, essentially, a mother, for a number of years, until Blythe recovered.

As time passed and Blake became more and more certain he had gotten away with his revenge, Lorraine began making “settling down” noises.  She wanted them to get their own little house in a nice town and live like a family.  Blake had little interest in spending his life with Lorraine and his dead brother’s kidnapped child.

They were living in Oklahoma City at that point.  Since it was obvious Lorraine only really cared about the baby, Blake saw his chance to get rid of both the woman he’d tired of and the baby that had, to him, only been a means to an end.  Through his various nefarious connections, he sold off a few diamonds and set Lorraine up with a new identity, complete with birth certificate that “proved” the baby was hers.  Thus, she became the widowed single mother, Lorraine Smith, living in Oklahoma City, raising her “son” Dekker alone.

Blake himself, confident by then that he’d pulled off his revenge and gotten away scot-free, started using his own name again.  He took up with a Norman, Oklahoma woman, whom he married when she became pregnant (with Marsh, hero of The Marriage Agreement).

For three decades, Blake kept the bulk of the diamonds stashed away, knowing if he ever tried to sell off too many of them, he’d be likely to get caught.  Marsh’s mother died when Marsh was sixteen, leaving the teenaged Marsh at the mercy of the abusive Blake.  But Blake was gone a lot.  And while he was gone, he took more than one unsuspecting woman as a lover.  He even “married,” these women, which made him a polygamist on top of all his other crimes.

When Blake Bravo finally died for real, of heart failure, in The Marriage Agreement, Marsh found the missing diamonds and, with the help of his long-lost cousin Jonas, uncovered the truth about baby Russell’s kidnapper.  Since then, more than one illegitimate Bravo has discovered his Bravo family ties.

The stories of Blake’s children can be found in…

For a little more about these books, visit the main BRAVOS page.